Most people know that Quidditch was a game played by wizards in Harry Potter. Every now and again Harry would take a break from his fight with Voldemort, get on his broomstick and whizz around in the sky chasing a golden snitch cheered on by the Hogwarts campus. 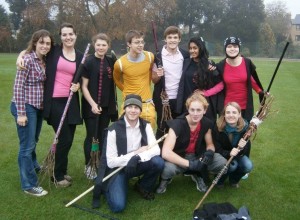 What you may not know is that Quidditch is no longer confined to the books. It began its journey as a Muggle sport in 2005 and now, eght years later, it has spread over the world; with hundreds of teams spread over 5 continents. The rules of the game are very similar to those in the book. 3 Chasers and a Keeper try to manoeuvre a Quaffle through 3 standing hoops while Beaters target them with bludgers. All the while each team’s seeker pursues the Snitch – a tennis ball in a sock tucked into the waistband of a snitch runner.

As one of the first college Quidditch teams, the Worcester team paved the way for Oxford to establish itself as top in the UK. Our motto ‘Fly Sexy’ probably describes us best. Chilled out Quidditch games happen every Saturday at 12 in Uni parks in addition to midweek training and fitness sessions for the competitive team.

Basically Quidditch is the best thing in the world and our team is the best. We will be at the Worcester Freshers’ Fair, so come sign up or send me an email (angus.barry@worc.ox.ac.uk) and we will quove you forever <3​

Theme by Anders Noren — Up ↑